Right, now I’ve had that little moment with my memories of that toast on my last post … mmmm toast … I should talk about my run on Saturday.  Basically, I’m trying to fit in my 11:00 yoga class in Bank with a long run before it, but it’s a logistical nightmare.  The gym doesn’t open til 10:00, so it’s not like I can ditch my stuff there and run from there.  I could run around home, but there are only so many routes you can do from my place that are interesting and I’ve got another four months to go.  Howeverrrrr … I work near Trafalgar Square, so I figured I could drop off all my stuff there, do a loop, and then walk over to Bank which, in addition to being the best fit timing-wise, would also give me an extra 5km walk on tired legs which I thought might be quite a good plan.  I wasn’t really sure where to go, so I just planned to go straight down the river to the east for 7.5km and then come back.  Simples! 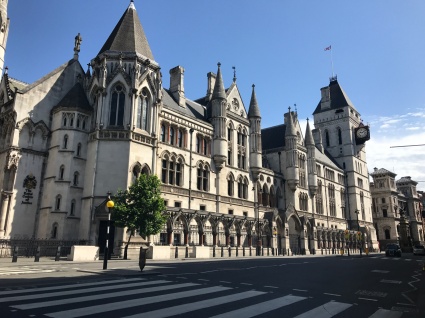 Let me tell you, it was the best decision I ever made ever.  It was the most gorgeous run ever, and past so MANY London icons.  Like literally.  SO MANY.  Check out where my travels took me:

Jeez!  I literally pass London icons every single day because I cycle to work, and my route passes a lot of historic stuff, but I never ever take it for granted.  Tourists pay a lot to see this and I get to see it for free every day from my Boris Bike!  Hashtag spoilt or what!  However it’s even nicer to see them on the run, and I’d never been further east of Tower Hill along the river before.  I had no idea it was sooooooo beautiful around Wapping and Shadwell, honestly, it’s so cute around there.  It’s like walking into a whole other world with cute cobbled streets, tiny alleys that lead off to steps directly down to the Thames, old-school warehouses, quaint pubs … I could go on and on. 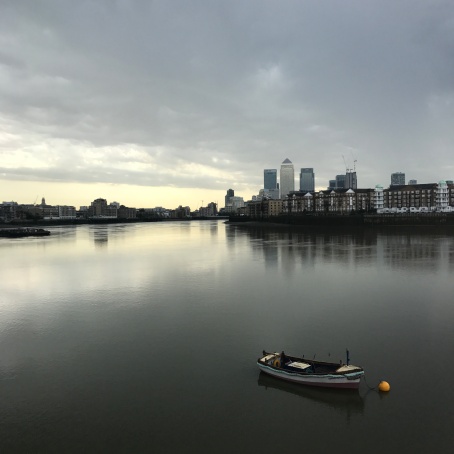 Sadly it absolutely pissed it down with rain right as I got to Wapping, but it cleared just as I was on the way back to let me take this picture.  It was such a beautiful moment in my life, like, the rain had just cleared, I was the only person around for miles, I was focusing at that moment on how amazing it was to be able to move with hardly any pain, and just then the sky split and this gorgeous shaft of light came through.  I’m not really a religious person at all but I am a massive believer in gratitude and focusing on all the good stuff and channeling positivity.  Right now I feel like I have so much to be grateful for with having been able to take charge of my recovery and being able to run again (just walking again was phenomenal), on top of all the things I’m just grateful for in daily life … I have some really fantastic friends and I’ve gotten to spend extra time with people this week I don’t always get to see (shout out to Jess) … the fact that I have a good job and and understanding boss, so I can afford to sign up for stupid things like ultra marathons and take time off to do them, and the fact that I have enough faith in myself to believe that I can at least give it a go.  Having that moment where my surroundings were so beautiful gave a heightened external sensory element was so lovely. 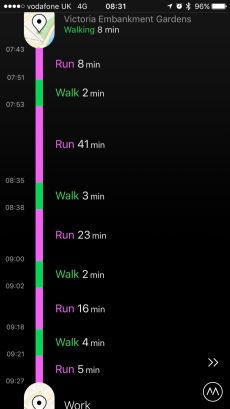 Anyway, tangent over, I really wanted to go 15km, but I only got as far as 7.2km to Shadwell and I couldn’t work out how to keep going down the river – it was all about the main roads at that point.  So I headed back, but I crossed over the river at London Bridge (that being the next bridge back) and ran down the south side of the river.  I really love that side of the river there, because there is sooo much to see, it’s so much fun.  In order to make up the 15km I had to head past Trafalgar Square down to Westminster Bridge and over it (ohhh the hardship, poor old me, what a shame pahaha) and then back, adding muchly to my icon tally.  I should say that I’m not actually steadily running all 15km, it’s very much a run most of it but break it up with walked parts too (and, erm, photo opportunities).  The screenshot here shows my Moves app’s breakdown of my walk/run ratio, and I’m pretty sure it’s about accurate.  This is ultra though and in my case it is most definitely not about the speed, it’s about getting through it!  I am a little worried that I’m running too fast when I am running though, so I’m going to focus next week on slowing it down and running more steadily.  Apart from the photos.  Obvs.  And the bits where I can’t run for the tourists – that last four minute walk was Westminster Bridge where I could either mow down tourists or run in the middle of the road, since the footpaths were completely rammed!

Then it was back to work, quick wash and brush up and I trundled over to Bank … guess what, via even MORE icons!  Covent Garden, the Royal Courts of Justice, the Old Bailey, St Paul’s Cathedral and Churchyard, Cheapside and the Monument were all on my route.  It is amazing to live in this city sometimes!

Yoga was as fantastic as ever and then – finally – it was time for my favourite part of the day.  Oh yes.  FOOD.  I had already eaten because I baked up more proats (this time I went for the gingerbread and raspberry combo and as predicted I liked it even more than the last batch – oooh and I did actually manage to eat some on the run!  I scarfed a little bit at 11km, and it perked me right up), but I went to Farmstand in Covent Garden for lunch as a treat … honestly if you’re in London and you fancy a healthy bite, do it.  DO IT.  It’s my favourite!  So macro friendly and all organic and delicious.  Plus the portions are massive, so everyone wins!

Anyway this is like the longest post ever so if you’re still with me then congratulations! I’ll let you go and enjoy the weekend, I hope you’re up to amazing stuff!

3 thoughts on “The One With All the Icons”