Good morning everyone!  How are you?  Are you having amazing weekends?  I’m having a lovely one – on Friday I caught up with a friend who (as I learned on Friday) had a similar back/foot issue to me.  Hers was far worse than mine but essentially the same, so it was fantastic to hear about what she’d done for it.  I’ve got a brand-new super-fun sounding reading list including items such as “Explain Pain” and “Healing Back Pain” together with “Painful Yarns”.  Add that to the titles I’ve already got in there like “Mental Combat”, “I Am That Girl” and “The Power of Habit” and my kindle looks like ether most distressing place ever pahahaha.  Anyway, it was lovely to see her, and yesterday I went to the races in Newmarket which was also nice – and, excitingly, the weather held off!  It was meant to be torrential rain but we got super lucky.  It was such a nice day, even though we didn’t win any money.  Oh well eh?!

Today was an exciting day because … tah dah dah … I ran 15km!  ExACTly 15km … is there anything more pleasing than when your garmin ticks over to 15.00 just as you reach your door?!   I’m currently writing this feeling incredibly smug post run, but also looking slightly maniacal as I have my massager in my back kneading away and a tennis ball under my calves which I’m rolling around now and again.  I’d decided to run by myself today because I really wanted to test out a proper longer run on my foot but I wanted the freedom to stop if I needed do.  I’m getting so sensible in my old age right?!  I planned a route down the river to Battersea Park, which is about 4.5km, then I thought I’d zig-zag round the park until I got to 10.5km, and then run home back along the river.  It is suuuuch a beautiful day today, for the first time really this year so when I woke up I was super-excited to be going out (apart from one lovely weekend a few weeks ago, this summer has legit been the worst, and this last week has been the pits – cold, windy and rainy.  Ugh.).  I also wanted to test out my new hydration pack which arrived during the week since it was my first chance to use it, and I also wanted to test out this baked oatmeal I made yesterday as a running refuel snack.

I passed a lot of random 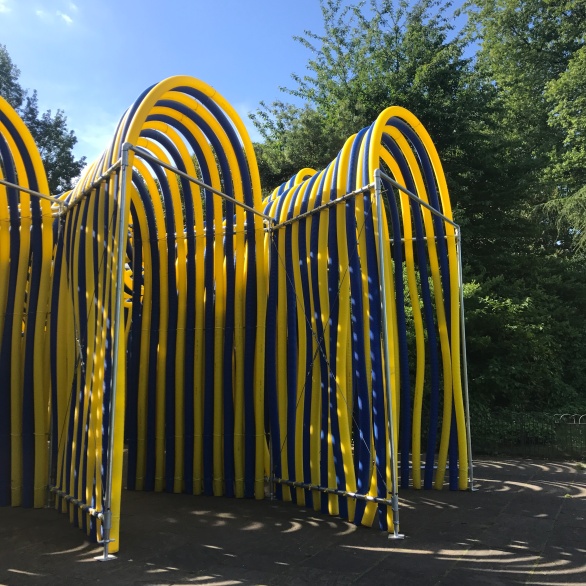 thing on this run!

I passed a lot of random things on this run!

The first good thing was that my hydration pack worked out brilliantly!  I thought it would, because it’s a Nathan VaporShadow and for my last ultra I used the Nathan VaporShape and it was absolutely fantastic.  I would have used it again in a heartbeat but for two things – first, it’s a little too small for this because it’s only 8ltr, and secondly because I “lent” it to a friend 18 months ago and I’ve never had it back.  I actually think I prefer the VaporShadow anyway though because it comes in extra-small which fits me better than the small/medium size that I had to get the VaporShape in.  I strapped myself in and I added 0.75ltrs water (I didn’t want to overcook it the first time I was using it, but it takes 2ltrs water in the bladder) together with other useful things like my phone, bankcard, tube pass, Boris Bike key, house-keys, some panadol just-in-case, and my slices of baked oatmeal.  Obviously they’re pretty small items but there was sooooo much room left over in the bag!  I think I could easily have fitted in a jumper, loads and loads more food and of course a ton more water, and that would be even without using the elastic straps on the front.  They’re really great bags and just like with the VaporShape I totally couldn’t feel it when I was running, which is pretty impressive given that I haven’t run with any kind of backpack since October 2015.

I have to confess that the baked oatmeal was a lot less of a success … mostly ’cause I couldn’t bring myself to eat it!  I usually run fasted so eating at all is a bit weird until I get used to it.  I did have about 1/4 of my oatmeal before I went (it’s really yum by the way, the recipe’s at the end but basically you can make it however you want) and took about half of it with me, leaving the last quarter to have when I got back.  However I just wasn’t hungry at all during the run, and I didn’t feel like I was losing energy.  It’s something I have to be very careful of because I have bonked before – and dramatically fainted over the doors of Pret in Brighton, how mortifying – so I’ll need to re-learn to eat on the run again.  However there’s time for that in future, and I’ll try again next week.

But the best news … guess what … I was largely pain free (like it was there for sure but only achy, there were no sharp pains at ALL), my gait was all but normal, and my right side didn’t tighten!  And I don’t feel anything like I did a couple of weeks ago when I ran 13km and felt like my entire body was a ball of pain and all movement caused me to feel sick.  This is FABULOUS progress.  I’ve honestly never been so grateful for just being able to move.  I have hundreds and hundreds of photos of Battersea, but I don’t think any is as sweet as this one here, which was taken as I got to 10km and I was literally thanking all the gods in the calendar for having gotten me to recover so quickly and so much … and as I did, this fountain turned on in front of me.  I’ve never even seen that fountain on before!  I like to think it was Battersea’s way of telling me I’m gonna be okay.  ‘Cause now I’ve taken this recovery into my own hands, I really think I will be!  I’m sitting here on my massager of course because I’m not going to take it for granted, but I’m super-pleased with it and so relieved cause I was a bit worried about going for so long but it’s held up beautifully.

So that’s all the news really!  I hope your runs are going super well this weekend, and of course your actual lives!

Recipe for baked oats (I couldn’t find one I liked on the interwebs so I made this up): 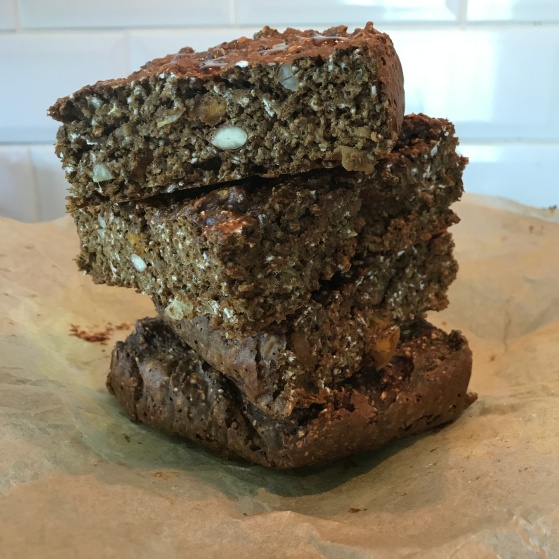 It’s not very sweet so I drizzled some honey over it but it’s nice without too.  Next time I’ll make it with gingerbread whey and some berries rather than the almond and coconut tub to mix it up, which will reduce the kcal count and up the sweetness and fibre … only thing is I don’t want it too fibrous when I’m out for a run!!!!!!  The macros for this version, according to MyFitnessPal are: