Hello lovers!  Happy weekend.  I feel like I start every blog chatting about the day of the week it happens to be … confusing because I’m British, surely I should be talking about the weather?  FYI, it’s a lovely weekend – yesterday the weather was literally perfect, not too hot, not too cold, perfect blue skies and a nice breeze.  Excellent.  Job done.

I have been absolutely hanging out for a rest day, so I’m taking one today, but before I could do that I had to do at least one long run this weekend.  I decided to do it yesterday so that I could completely enjoy my Sunday, and I planned to go 25km.  The only small downside was that I was meeting friends for breakfast at 10:30 so I had to make sure I a) stayed local; and b) hauled my ass out of bed early enough to get it all done, get back and get down to the King’s Road for 10:30.  The first part was fine because I decided I’d run down the river to Kew and back, which is about 25km … but the second part was more of a struggle.  I figured I had to get up at 06:00 to make it all work … which is fine … except that obviously I didn’t, so I ended up not quite having enough time.  It wasn’t the worst though because I still had enough time to bash out a half marathon which was plenty really – 25km would have been upping my distance by 6km from my longest run so far at the end of a heavy training week so on reflection it was probably not the best idea anyway!

My focuses for this run were twofold: 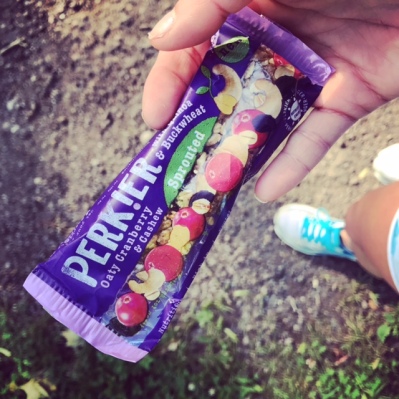 Honestly, I can’t understand how the eating thing can be so difficult for me.  When I’m not exercising I practically have to be in full body restraints to stop me from scarfing my own body weight in food at every meal, but put me on a run and I couldn’t be less hungry.  I decided that before I went, I’d try eating some Dutch spice bread (which I get from Hema, this Dutch shop in Victoria, and it’s like £1.25 for five individually wrapped slices – WINNING) with some butter.  Mostly I decided this based on the fact that I absolutely love it, so I thought it would be relatively easy to motivate myself to eat it.  I did have it, and it was delicious (and I’d have been happy to eat more!) but I can’t say I really felt any difference whatsoever in my run!  At 10.5km I tested out a Perkier bar – this is a brand I’d never heard of before, but Race to the Stones is using them as its fuel at feed stations so I thought I’d better try them out in advance.  First, they are hard to find!! Allegedly they’re sold at Holland & Barrett and Whole Foods, but I couldn’t find them at any of the four H&Bs I tried, and Whole Foods only had the cranberry and cashew flavour.  I wouldn’t necessarily have chosen that flavour, but beggars can’t be choosers and  so I dragged it out right in the middle of my run and forced myself to eat it while walking along.  It was actually alright, it tasted fine … the only thing is it was really really really sweet.  It might be just that flavour, but it felt like my mouth was coated in sugar for ages after I ate it.  On the plus side, it didn’t make me feel sick!  I’m definitely going to get some of the other flavours online because I think H&B has the full range online (ooh I should do that now actually).  They have more savoury sounding flavours (sort of) based on nuts, so I’m going to check those out going forward.  It’s five weeks til Race to the Stones which is a bit tight, so I’ll have to do some testing pretty quickly … ohhh the hardship, having to eat eh?!  One trick I did think of was testing them on the cross-trainer because my heart will be higher on that than running anyway, and also because it is nice and close to a loo.  Which cannot be overestimated when testing out race fuel!

As to the running steadily, I was mildly (okay very) impressed with myself on this one.  I ran pretty much the whole thing!  Obviously I stopped in the middle because I had to in order to eat my Perkier bar, but otherwise there was virtually no walking.  I didn’t even have to stop for stag beetles or rats … there were literally no excuses.  Now and again I walked a few steps, like if I wanted to adjust my pack or have a drink or something, but it was really steady otherwise.  I’m actually going to practise walking next weekend because it’s very different on your muscles, so I think I’m going to do a long run on the Saturday and a long hike/walk on the Sunday.  I think I’ll try and hit up my friend Susan to come walk with me on the walk since she likes that kind of thing … I’m sure she’ll be delighted to have my company for a few hours pahahahah!  Lucky old Susan …

Right, well I’ve wittered on for long enough – have lovely weekends!  I’ll no doubt be back in the week to report on something, but my training this week is going to be a bit more cross-trainer based in anticipation of having longer sessions at the weekend.  I’m thinking Monday/Wednesday cross-trainer, Tuesday/Thursday interval runs, Friday rest and then Saturday/Sunday the long run/walk as above.  Then on top of that I’ll have strength sessions on Monday and Wednesday and endurance and plyo sessions on Tuesday and Thursday.  I’m not really 100% sure I have time to go to work really, but I’m sure my boss will be fine.  FINE.  He’s so lucky to have me.