Hey hey!  Sorry it’s been a couple weeks; the only reason really is that I literally had nothing to say last week that wasn’t exactly the same as the last few weeks haha.  It feels like it’s been absolutely ages since I wrote but it’s gone pretty fast really.

This blogpost’s going to be a little different; like I said, in terms of my physical and psychological state nothing’s really changed except that my best friend muscular atrophy seems to have made an unwelcome return, my leg’s killing me haha.  That’s just been a special this week and I’m wondering how much of it is psychosomatic because I am suuuuuuper nervous about my appointment TOMORROW to have it assessed.

Now I should say that no-one has actually told me what the next steps are; it was basically like “Go away for six weeks and see ya after that” (in the nicest possible way – and I never thought to ask because all I cared about was “Six weeks in a cast?!“).  However about three weeks in, it became very apparent to me that none of my doctor or physio friends seemed to think that six weeks would mean much really; they’d all exchange knowing and slightly pitying looks every time I mentioned 24 July, though they were very non-committal when I asked them what the next steps might be.  So I did a bit of research on Dr Google and discovered that basically it’s at least six weeks of easing back in after the six-weeks non-weight-bearing on the best case scenario.  Oh and the “gold standard” is the six-weeks non weight-bearing and it does have a good track record compared to every other intervention, but it’s still not great – something like 56% of patients returned to sport within two years …!

So basically tomorrow there are three doors:

Since it wasn’t really painful when it went into the boot, and since there are so many other random pains shooting up and down that leg and hip, I genuinely have no idea whether it’s healed or not because as far as I can tell it feels exactly the same.  It’s literally like being on one of those old gameshows on the telebox where you blindly pick a door and hope you win a million dollars and don’t get sent home with nothing.  I’m trying to hope for the best but be prepared for the worst … but I am super super scared!  Door 1 is what I need in my life, all fingers and toes crossed please!  I’m pleased with how I’ve looked after it though; I’ve been so careful and I’ve done everything I can so I should have given Door 1 the best chance.  I think it’s only touched the floor three times in the last six weeks – the first when I slipped on the stairs at home, the second when I tripped hopping at work, and the third – haha – when I think I sleep-walked the other night!  This last is unconfirmed since I was definitely on the move (unless a burglar came in, stole nothing, but ate a spoonful of peanut butter and left the jar and spoon on the counter), but I might have sleep-crutched.  It will forever be a mystery … I’ve also done as much as I can to keep active, with swimming at least three times a week and up to six times (depending on the week) and doing core and glute exercises whenever I can.

I’ve also had the TENS/EMS machine out, I’ve rested it and I’ve been focusing heavily on my diet – so heavily, in fact, that my mother has started spreading rumours that I’ve got an eating disorder (eyeroll).  It’s been ALL about foods that are calcium and vitamin-D rich as well as protein-rich to get my muscles into as good a shape as they can be.  Other than now worrying I’ve overdone the protein and hence my muscles have grown just enough to atrophy again, I’m happy I’ve at least given it my  best shot!  The photo below is a typical day’s eating – it’s kind of hard to tell but this is the shizzle:

So in that I squeezed in more than ten portions of fruit and vegetables, at least eight superfoods (ginger, garlic, turmeric, cinnamon, spinach, greek yoghurt, beetroot and hemp hearts), over 100g of protein and 100% of my calcium and vitamin-D DRAs for the day.  Even though I chose pretty foods for the pictures(!) this is genuinely representative of what I’ve been eating over the last few weeks (let’s not talk about the burger I had at the pub today though) – but pan-fried mushrooms in a  greek yoghurt sauce looks more like something the cat threw up than anything appetising, no matter how many nutrients are in there!  Actually it’s not that different to how I eat generally anyway, although quinoa flakes porridge and the sheer amount of stuff you can do with greek yoghurt have been brand new revelations over the last few weeks.  NOM NOM NOM. 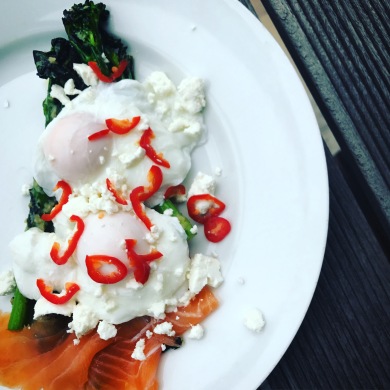 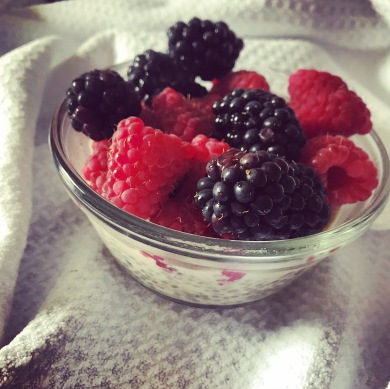 Weird things I have had to do today to prepare for my appointment tomorrow have been to find two matching socks and to wash my sneakers so that they match – my left and right were totally different colours!!  I’ve also packed a bag big enough to take my boot if I’m allowed to take it off, packed little plastic bags to put all my metal jewellery in before the MRI, and sorted out my route so that I don’t have to worry about timings etc. I’m going to swim first because I know I’m going to wake up super-early, and besides I have to miss rush hour on the tube, so I’m going to head off into town about 06:00 as usual, be in the pool by 07:00, and on the bus over to the City for 08:30.  My MRI isn’t til 10:00 but I suspect it’s going to take me aaaaaages so I might as well take it in a relaxed way rather than stressing out.  I also might try and grab breakfast somewhere if I can since after the MRI it’s all a bit of a rush to get over to the Shard for my 11:00 appointment with the consultant.

So anyway I’m going to leave this here because I’m literally rambling, but I will update you tomorrow post-MRI and appointment.  I’m off for a nice relaxing bath and a bit of Deepak Chopra to help me sleep!