Morning!  I hope everyone’s weekend is going well?  I don’t understand how the weekend days go so fast.  I think I’m built to be a lady of leisure.  I’m prepared to compromise though, maybe a five day weekend and a two day week?  It seems fair …

My weekend has been looooovely so far; on Friday I met up with my out-of-town bestie for a nice quiet supper – cough cough – which involved some bottles of wine and three desserts between us to share.  We also went to M&S though to buy kale for green smoothies, because we are healthy.  That’s right, healthy.

Astoundingly, I managed to make up yesterday without a hangover oooooh!  Probably this was because I was drinking charcoal black smoothies on Friday which (serious tip this) are amazing for avoiding hangovers – honestly, if you’re wanting to drink but also wanting to avoid a hangover, get some charcoal in ya.  And the same goes if you wake up with a hangover but you want to get rid of it, a charcoal latte or black smoothie will sort you right out.  It’s not just a hipster thing honest – they use it in hospitals when you take an overdose because it binds to toxins in the body and eliminates them so it really is a thaaaaang!

It was pretty lucky that I didn’t have a hangover yesterday because even though it was a rest day for me, it was v much an active rest day since I am DETERMINED that my left side is going  to release and let my foot be normal again!  I always do yoga on a Saturday morning but this week I had a full day of yoga, chilling, stretches and acupuncture in a massive effort to get it working again.

I kicked off with acupuncture at 09:00 before cycling over to the City for my regular Saturday yin yoga class.  I absolutely love yin yoga – I’m not into the more yang types of yoga like astanga because I get enough movement and yang in my life without adding to it, but yin is aaaaamazing.   I feel like London life is so yang, like, for me I get up at 05:20 every day and from that point on I’m rushing around like a maniac – I run around getting ready, then I battle the traffic to cycle into work, do a bit of work, do my morning cardio workout, rush to work (by this time I am always late), rush back to the gym and squeeze in my afternoon strength workout before getting back to work, then usually heading out for supper or to meet friends for coffee or drinks or something.  Even when I’me home “relaxing” I’m not really relaxing because I’m researching something on the internet or on WhatsApp or planning something or other.  There’s always something to be stressed about, something to think about, somewhere you have to be, a diary to juggle … so having an hour to yourself to fully relax and not think about the world is something I think every Londoner should get to do at least once a week.  This week I’d persuaded my friend Susan to come along too so I promised I wouldn’t be late … ummm yeah, about that …!

I was totally craving Pret porridge for breakfast so I dropped into Walbrook to grab it between parking my Boris bike and making it to my yoga class and they also threw in a free rooibos and cacao tea, so lovely!  It did however mean that I had to walk/scuttle along the road eating my porridge balanced on my tea like this since I was running too late to eat in – good look.  Nice.  I actually felt like I’d achieved a major win by not spilling it all down myself, tripping up or otherwise making a total twat of myself so achievement 1 of the day – tick!

Yoga was amazing as usual, and afterwards Susan and I headed off to brunch to discuss trail runs which we wanted to do – we don’t know the City that well so we went over to Aldgate to this Swedish place called Smaka since we heard the brunch was a bit different.  It’s a totally reasonable price I have to say – I had poached eggs on sourdough with salad and västerbotten cheese (don’t judge me, it was awesome) and a green tea and it was only a tenner including tip.  Winning!  Then on our way we’d passed this amazing looking coffee place with seventy – SEVENTY – different coffees from all round the world. All I can say is it was worth the trip to the City and go go go!  Cafe Frei in Alie Street – it was YUMAZING.  I had the kyoto plum coffee and it had real plums in it!  I feel like I could never pull this off at home but it tasted like the elixir of life … It’s only a kilometre or so from yoga so I feel like I might be diverting myself there a few times in future! 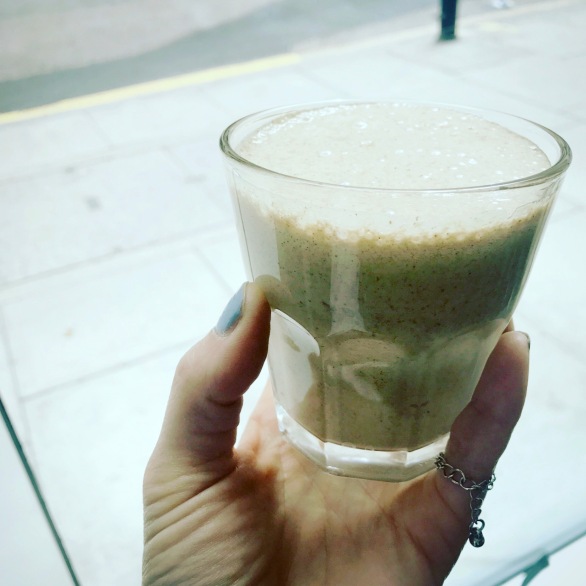 Then it was time for the workshop that  I’ve been looking forward to aaaaaaall week – it was a postural alignment seminar, then a foam rolling/self myofascial release workshop followed by a flow (ugh, but seriously our delicious instructor Caleb even managed to make that fun) and then an hour’s deep yin release.  It was THE BEST.  I headed out feeling so calm and chill after it and my foot was behaving beautifully, which is always such a nice feeling!  I was actually enroute to a prosecco and Eurovision party so I needed to pick up some prosecco, but I kind of didn’t really want to kill my calm and chilled out buzz (plus I hadn’t had any charcoal to kill any hangover!) so I headed up to As Nature Intended to buy my own drinks for the party … organic prosecco for everyone else, and kefir and kombucha for me.  That’s right – I know how to live people.  Yup, I’m a crazy party animal, uh huh.  Raving it up on a crazy Saturday night … the party was awesome though, my friends are so lovely and so much fun and it was just fantastic to see everyone and catch up (and have the piss ripped out of my for my kombucha in a way that only your besties can do).  Also Moldova.  Also Mr Sweden.  MR SWEDEN.

While I was at As Nature Intended (which is my very favourite organic health food store in London, I used to go to the one in Chiswick years ago before weirdy-beardy good became a THING) I also picked up a bunch of snacks to try for fuel on my long runs.  On the last ultra I did there were feed zones, so I didn’t have to worry about nutrition on the run and I used mostly recipes from Feed Zone Portables for my training runs.  However I can’t really take fresh food to the desert with me (now that really would be fermented food, but I feel like it wouldn’t be in a good way …) so I need to experiment with stuff that’s available out there that I can just pack and take.  Basically, what I’m saying is that I have a good excuse to stock up on delicious food that I might otherwise feel guilty about  buying … I love this ultra lark!  It has so many benefits.  I got little rice cakes, some corn, some dessert-bars (I will no doubt eat these for actual dessert rather than ever taking them on a run), some mini-toasts … oooh it was endless.  I can’t wait to be able to do a long run, purely so that I can eat.  Mmmmm …! 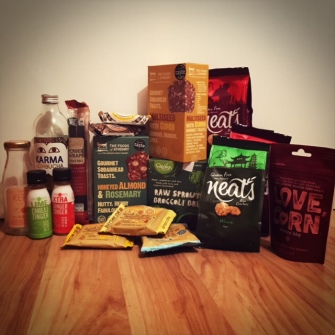 So that was my hippie, alternative, I-will-get-this-bastard-foot-sorted-out, relaxing, health-foody, glowy rest day – I loved it!  And the best news is that my foot does feel good today, it’s not perfect and maybe I’m trying too hard for it to feel good but it has relaxed a noticeable amount.  I’m about to go try a 5k run and see how it holds up so let’s see how it feels after that!