Back again!  Did you miss me?!

Okay first, this post was actually written a week ago but just as I wrote it, my internet went down!  And, thanks to BT’s incompetence, has stayed down.  I’ve resorted to desperate time and am hotspotting off my phone to get this published … right, as we were:

Here’s the thing; it’s bank holiday so I thought it was a good opportunity to get in another long run.  Also, I have my specialist appointment tomorrow morning at 09:00, so it would be good if my back/foot were acting out a bit so that I can tell her what hurts and what doesn’t when she is trying to establish why my nerve went nuts in the first place.  THere’s nothing worse than turning up to a specialist’s (or any other!) appointment and acting like the world’s biggest hypochondriac ’cause all of a sudden your body is behaving beautifully and they can’t find anything wrong!

So with those two things in mind, I pootled off again – initially I thought I’d do 10km but I also kind of wanted to explore a little further down the river, so I thought I’d just see how I felt.  I also wanted to try out going more slowly to see if I could run more steadily – I keep finding myself zooming along at about 13kph (please, I know this isn’t fast, but it’s quite fast for ultra!) (also for me, I am not a fast person haha) so it’s not that surprising that I can’t maintain it for 15 or 16 km, let alone 260.  Now, I should say that I’m not planning on running all of the ultra anyway, because it’s ultra!  Therefore I’m not that bothered about not running steadily, but I’m also keen to try run as much as I can.  Therefore I wanted to keep it down to about 10kph today and see how that went.

The first half of the run was pretty uneventful really – the only thing was that if I’d rubbed a couple of brain cells together I’d have realised that the torrential rain and storms overnight would mean that the path would be a little bit muddy … or so muddy that I might as well have been in the river rather than alongside it.  It was lovely though, especially since I was running alongside a guy who was very running at a very similar pace to the pace I wanted to go (about 11kph, 10kph just felt too slow at that stage) and the path itself is just gorgeous with the river on one side and trees lining the other.  I felt really good when I got to Barnes Bridge so I decided to go one further down to Chiswick Bridge, since I’ve never been there before.  I’m pleased I did because the path was super-nice down past Chiswick Bridge – it’s really narrow and lined with trees and feels much more rural, even though there are actually loads of buildings. 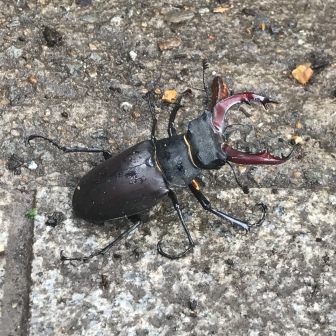 It was only when I got back to the north of the river that that fun started … pretty much as soon as I got down the stairs when I did a Wile E Coyote legs-in-the-air sprint to keep from stepping on this giant guy, who was on his back at the bottom of the stairs.  I couldn’t just leave him there – I am reliably informed that he’s a giant stag beetle, which are endangered (thank you Romy) so I got a giant stick to match the giant bug and flipped him right back onto his feet.  And then I did what I’m meant to do and ran before he could realise what had happened and get those claws anywhere near me!  So all was going well, the weather was improving, I was feeling really quite excellent about my run and how good I felt, I was congratulating myself on rescuing the bug when … a rat slithered into my path and stood there menacingly.  MENACINGLY I tell you.  And this guy wasn’t just any rat, I swear to God it was at least 20cm plus its tail.  And it just sat there, baring its fangs at me!!!!  And this path was literally like 60cm wide with the river on one side and trees on the other.  What are you meant to do in that situation?  Obviously I did the sensible mature thing and clapped my hands to my cheeks, opened my mouth as wide as I could and shrieked at the top of my lungs.  I might as well not have bothered because for all the rat cared I might as well have not been there.  So I charged at it, remembered the few gymnastics classes I had when I was a flexible kid 20 years ago and did a split jump over it, still screaming, and fled down the path at the speed of light.  My heart rate says it all …! 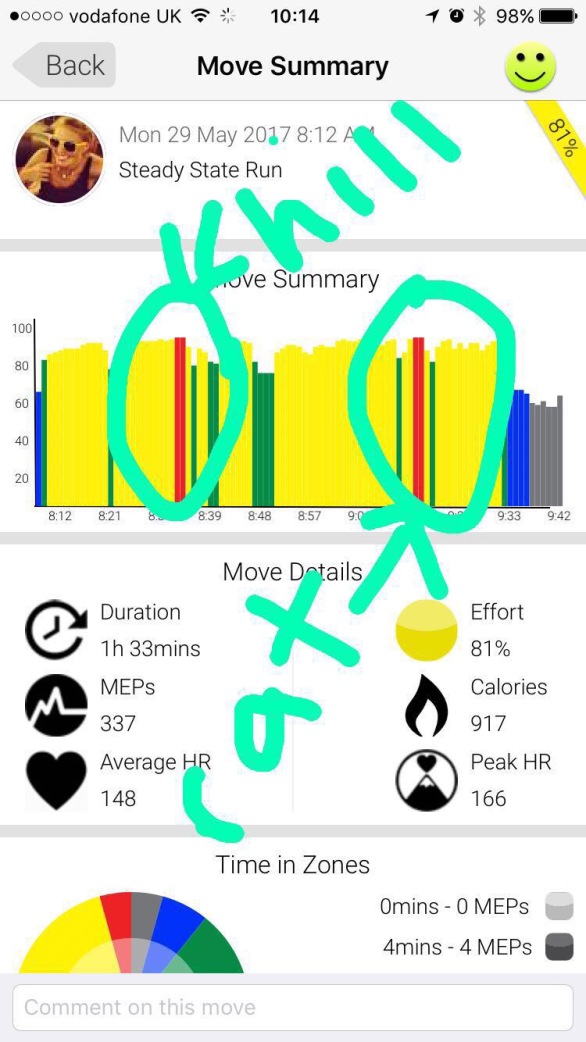 After that not much happened, I just settled back in and ran home, pretty steadily.  I was tired by the end (which is not that surprising, given how much I’ve suddenly increased my run load!) and my pace toward the end was between 10kph and 11kph without me really trying to keep it down BUT I didn’t need to stop!  My Moves app shows how much steadier I was (the walk in the middle was the bug rescue operation pahaha), but I chugged my favourite concoction of freshly squeezed grapefruit and chia seed and pootled off to the gym and did an endurance work out.  Annoyingly I couldn’t get onto the squat rack – the gym was rammed! – but I tottered back after lunch and got that in too.  I’m feeling so virtuous today!  I even had a buckwheat and lamb salad for lunch at the pub, and I didn’t even have dessert (not my choice, incidentally, no-one was having it aaagh).  This may be the only day ever that I will ever be this good!

I hope you’ve all had the most lovely bank holidays and I’ll leave y’all alone until later in the week now.  Enjoy it, woo hoo a four-day week!